Where have you been?

And having said that, I think I'm in my most creative period for years; at least since I stopped drawing my barbarian comic Talmac in 2011 (I still love some of those pages, and really enjoyed the square format).

In 2014 and 2016 I posted a few cartoon strips on a tumblr, and then summer of this year, while mowing my parents' lawn, I had a rush of inspiration from something that must have been welling under the surface and scribbled down the beginnings for many more strips. They've kept me going ever since.

I've called the collection Multum in Parvo, and it consists of various different series: The Harveys and Halfknots (social commentary, get it?), Fish in a Suit (political commentary, abstract), A Year in the Life of a Cartoonist (auto-bio only really in a symbolist fashion) and Stripling, probably the one I'm proudest of. It's a strictly formalist, minimalist continuing story of a sapling that I like to term sap opera. There are also various other little topical or silly things that go up there too. I post weekly on a Monday, both on tumblr and twitter, usually in the early evening (UK time).

I love reclaiming old work, that'll be a recurrent theme here. I like re-reading things I've made in the past. My adult work is usually better than I remember it being and my juvenile work, while usually bad, often still has something of interest about it. Emotionally speaking, reclaiming it helps me feel that I didn't ultimately give up on that thing and brings a little peace, while often old work will help me remember who I was at that moment in time and what voice I had. It helps me define where I might be going.

On that note, I've revisited a concept from my first year at uni. It was a project for myself and created with the same seeming ease with which everything seemed to happen in youth. I can only really describe it as "fruit-and-veg noir". I'm writing two short stories set in the same city, and with the same detective character I originally had, and having a whale of a time, honestly. 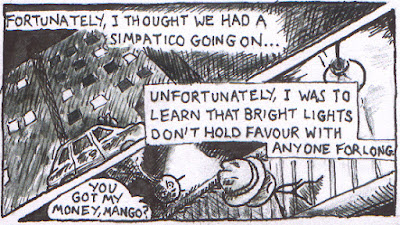 I'm nearly done with first draft scripts, and I'm already at over 50 pages of comic, so... not as short as I'd hoped, but I'm looking forward to having written it, set it aside and then coming back to see what I've really got there. I'd love to realise it, maybe a self-published print book, but I don't want to get ahead of myself.

I've also dug out some old cartoons from 1999/2000. I was very young then. They're silly and naive, and I still find them funny. The spirit of them is sound. I realise I'd (again, seemingly without effort) struck on a winning concept for a strip (I did read a lot of them at that age); one that's simple to draw, with defined characters and setting that are still flexible enough to go off in all sorts of interesting directions. My mind's been flooding with ideas for more of them. What's fascinating is that I just drew them in pen straight away, mind to paper, and numbered and dated each one so I can see that I'd do them in batches each day and quickly accumulate a body of work. I'd like to work like that again. They'll probably be appearing online soon in some form. 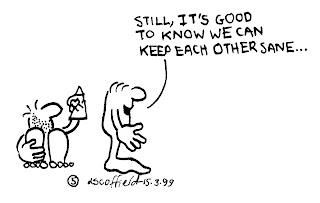 I think one of the reasons for my new burst of creativity (and renewed vigour?) is a decrease in paid work from April of this year. I've had more time to try out creative projects for one thing, but for another I think rebalancing what I do has adjusted my priorities away from a job I probably don't enjoy all that much any more. I hope to make more art generally, comics specifically, and to make more of them. Currently I have a digital tips jar at ko-fi and I'm looking at more ways to make a living with art and make more art.

I haven't even mentioned Totopolis yet, which I was working on Jan-Mar this year. I'll come back to that another time, but drop in a sneaky panel: 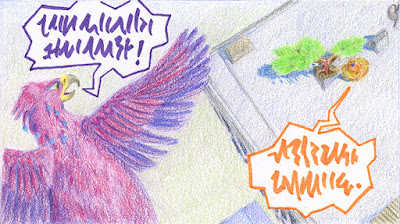 Oh, and what planet have you visited most recently? Mine's Delirius, and it was worth the diseases. 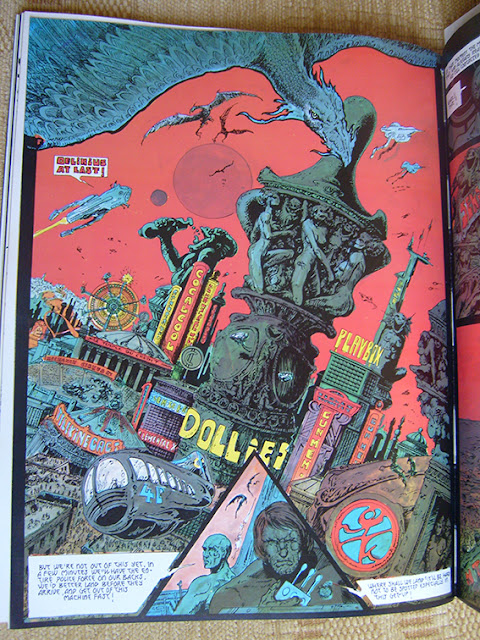