Yesterday was the last update of The Box webcomic for a while - I don't know when I might come back to it, in all honesty. All of the cartoons to date are on instagram.com/theboxcomic (but you'll need an account to see them unfortunately) and a good number of recent ones are readable for free on my Patreon page. The Box was really the one creative project that carried me through most of the period from March till now.

I've had variable access to materials and equipment and variable amounts of time for months now, but somehow I kept that webcomic ticking over and, frankly, reflecting my feelings as things were bad and continued to get worse (both more and less overtly reflected in the strips). I probably drew about - quick check - 80 cartoons in that time. I think the high point for me was when I had run out of all means of scanning and just had access to a knackered laptop with a trackpad and Paint on which to create anything for publication, was prepared to give up, then in one restless night just about came up with a way to keep it going (in the abstract). 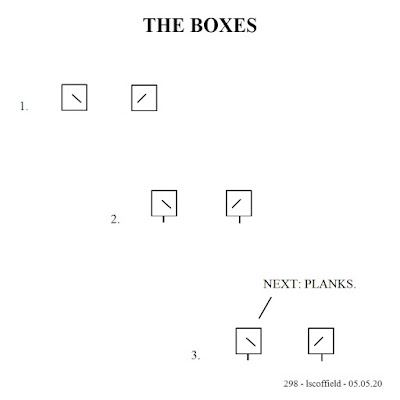 I do take a certain amount of pride in that. (I used the free editor on pixlr.com as well because Paint was rubbish.)

Alongside continuing The Box, I was having lots of ideas for projects in the first three-four months of the UK lowdown. I'd get periods when I could work at things. Then at some point, in July I think, I hit a wall and I'm still pressed against it.

I can remember having plans, some time long ago before all this happened, but I'm not sure what they were and approximately half the time, I'm not sure why I should care. My mood's up and down. Somehow I've done more of the Multum in Parvo topical/satirical cartoons that I'd originally halted in March, not long before pandemic restrictions here kicked in, out of a desire to chronicle this monster/these monsters in some way. I'm kind of proud of that work too.

I'm having a go at making a Let's Play video series on YouTube, just to see if I can. It's been OK so far, I've certainly enjoyed seeing what I could do with my technical restrictions and getting into video and audio editing again in some form. I don't think anybody's watched it.

It might've been the only way I could convince myself into playing The Feeble Files and I don't yet regret that decision.

In the past few weeks I've been getting obsessed with tabletop roleplaying games. I've got no-one to play them with, but I've been enjoying them as documents. Writing them and playing them are such different pursuits. I'm fascinated by the mechanics applied to what is (essentially) a collaborative improvisational experience that draws together parts of traditional oral storytelling, the act of acting, and gameplay. They are, in effect, always so far away from a rulebook.

Anyway, I digress. I've been thinking a lot about RPGs.

I've created a few pages for a couple of different comics projects.

I don't know what I'm doing. More precisely, I don't know how much of anything I'll be able to make, as my access to materials/equipment fluctuates, as my mood changes so rapidly and profoundly and I can't progress because I don't have a point to progress toward.

Which is all to say, I'm going to continue working. I'm not sure what I'll produce, almost certainly more cartoons and comics, but what else besides I'm not sure. I'm not sure how frequently things will appear, but that they will appear. The pressure I put on myself to produce these things to a schedule, when I really don't need to, hasn't helped me recently and it's something I need to shed.

So, I'll be out here, sometimes more and sometimes less present, but I'll be making things.

Thanks for reading. Take care X