I forgot to update you on what I'd been doing in March, but there wasn't a lot to talk about so, if you please, have a double bill now...

This month I've been working on a short project that I can't share at the moment, but hopefully I can point you to quite soon. I'm happy with how it's gone, what it's for, and I'm excited to share it with people. I've had quite a constructive period of conceptualising, so... watch this space for further news.

What would have been Hal Hartley's latest film, Where To Land, is not currently going ahead. It was funded on Kickstarter in 2020 shortly before Covid-19 became a global situation and as things currently stand, Hartley and Possible Films would be unable to make the intended film with the money raised. Backers have been refunded or offered alternative Blu-ray sets of other Hartley films (screenplay and soundtrack offers have still been fulfilled). I'm deeply sorry this film isn't going ahead; Hartley is one of my very favourite filmmakers and I think his films are sensitive, honest, deeply considered and very funny - I recommend them highly.

There's a new collection of Paul Kirchner strips available from Éditions Tanibis: Dope Rider: A Fistful of Delirium. Tanibis are dedicated to independent international comics work (publishing albums and collections created in French and translated into French), and they seem equally dedicated to the meticulous, funny and highly imaginative work of Paul Kirchner, having released French and English collected editions The Bus, Hieronymus & Bosch and Awaiting the Collapse. Take a big recommendation from me to check out the work of Paul Kirchner and, if it seems like your kind of thing, I think it will be worth checking out Tanibis' other publications too.

I haven't seen any recently released films for quite some time (except Tenet and about that "all I can give you is a gesture" [bless you, Martin Donovan]), but I have had the opportunity and inclination to catch up with some interesting older work.

I recently watched the whole Infernal Affairs trilogy for the first time (I'd only seen number one before); they're hokey but fun and there really are some cracking performances in there. For me, Eric Tsang really stands out in number two. Above all, I love them as a writing exercise (increasingly so), to the point where the third film is seemingly in an impossible situation to achieve what it sets out to achieve, but finds an interesting way to do it anyway. I also appreciate the little details of Hong Kong that appear throughout and ground the films in a real sense of place, despite the "heightened" sensibilities of the narrative.

I watched some Buster Keaton films I hadn't seen before, and in some cracking 4K restorations that make them look incredibly sharp, even at 1080p. I revisited The Navigator and discovered Seven Chances and Battling Butler. They're all full of ingenious gags and incredible physicality. Seven Chances, for some reason, has a vein of overt racism running through it that soured my experience, but there's lots of extraordinary business and, given its plot, I think it neatly sidesteps misogynistic pitfalls (or perhaps leads them to a rock slide).

I think I enjoyed Battling Butler the most for not being a big stunt picture. The first third or so is a cracking romantic comedy; Buster Keaton on a more intimate scale, like in Our Hospitality, another favourite of mine. After that, it effectively changes genre before looping back around, kind of like a Stephen Chow picture, while retaining dramatic momentum. It doesn't hurt that I just love Sally O'Neil's first outfit too. 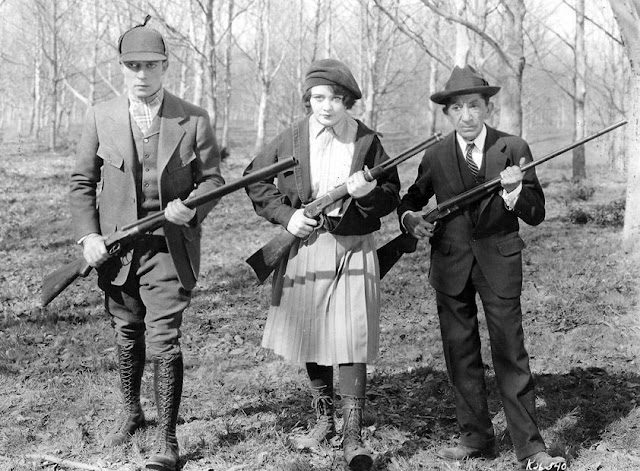 And most recently, I've watched Lars von Trier's "Europa Trilogy" for the first time: The Element of Crime, Epidemic (timely? not timely?) and Europa. They're all compelling in their own ways and all unsettling. They're supposed to be.

I have a somewhat ambivalent relationship to von Trier pictures, because they're usually technically inventive and have a strong sense of drama, but the former tends to distance the viewer from the latter. A synopsis of Europa, for example, might lead you to think it is a rather conventional period melodrama, but that wouldn't convey all the covert ways this is being subverted by how it's presented. The climax is overtly not conventional melodrama.

I think the problem I have with these films in general is that I greatly admire the storytelling and filmmaking skill that's occurring while being acutely aware that the film's acutely aware of it's own artifice. There's a thick vein of black humour throughout, but the stories are essentially comfortless. The worlds presented somewhat correspond to our own, but they also have the feeling of abstractions, whole-cloth inventions or academic exercises, given palpability and immediacy through the artifice of film, and that can be really disconcerting. I have mixed feelings on them, but I do keep coming back for more.

I've been delving back down the RPG rabbit hole again, and just enjoying browsing games and thinking about roleplaying. Clicking through this Wikipedia list has diverted me for hours all told.

I'm definitely drawn to the quirkier stuff, both in tone and mechanics. I think I'm looking for something that leans more toward storytelling, is mechanically simple and on a macro scale, so you can really push it out where your imagination wants to head and the system bends with you.

Games that have caught my eye include Bunnies & Burrows (that non-human perspective), Space Opera (I feel you could do a lot with the system as a backbone) and Jenna K. Moran's Nobilis, Chuubo's Marvelous Wish-Granting Machine and Glitch (I feel a lot of sympathy with their intent, style and tone but find it really hard to assess how they actually play while skimming for the info; they're very literary). Ars Magica introduced a troupe system which has now taken root in my imagination.

Tales from the Floating Vagabond has a playful skills system and looks like it offers some of the latitude I'm looking for and - above all else - fun! I'm fascinated by the Hogshead Publishing New Style games (The Extraordinary Adventures of Baron Munchausen [Munchausen is one of my favourite literary characters period], Puppetland, Violence, Pantheon and Other Roleplaying Games and De Profundis). Really, they seem to present philosophies and critique of roleplaying, standing as documents in and of themselves as much (if not more than) as games. Their spirit seems to be carried forward in the modern indie RPG/zine scene, such as found on itch.io. I'm really interested in digging deeper there, but itch seems a bitch to search and the volume of work on offer is, frankly, quite daunting. Understandably, lots of the creations seem to be on a micro scale and that doesn't quite seem to be scratching my itch at the moment.

Numenera and the Cypher System offer something that appeals to me by making part of the mechanics of character creation descriptive; you're an adjective noun who verbs. That feels like a step in the right direction toward having the mechanical side melt away so that only the story is visible. I was delighted to read about Over the Edge, my most recent discovery, going probably a little bit further a few decades before with open-ended descriptors for characters instead of skills. That's something I'd like to dig into more. Unlike with other legacy games, the publisher seems a bit coy with keeping past editions of this one in print, even digitally.

And let's get this out of the way, going back to granddaddy Dungeons & Dragons as our control sample: Planescape is it's best setting, by leagues. It's an entire cosmology that reshapes the pre-existing D&D fantasy into a conflict of philosophical schools and physical elements. I don't think you could do more (narratively) with that system than you can in this setting, and it's been discontinued since 1998!

First thing's first: I've changed my channel name! It's now Catsequences. I like it better, it's more characterful and based around what we'll be getting up to, rather than who on Earth I might be. There's a cat in Divine Divinity, right? And consequences?

I've got back into a rhythm of weekly videos (alternating games at the moment). One of the reasons I got out of the routine is that...

The Feeble Files is a horrible, bad game. Recording the "arcade" episode took hours of unavoidable, repetitive gameplay to get to a point of progression and editing that into something illustrative but entertaining was my biggest challenge of let's playing so far. I think I succeeded, but check it out for yourself and see what you think.

Then the game proceeded to let itself and us down further. At this point, it's not quite a spite playthrough, but I'll be glad to get through this thing, or call it a day if it becomes any worse. In the meantime, I hope the videos I'm making are entertaining? Indicative?

Divine Divinity continues to be fun to play and much easier than The Feeble Files to record and edit. I enjoy doing a bit of ham acting, although I quickly run through my repertoire of voices. Huzzah! I published three new videos of this (hopefully) characterful gameplay, the next on the way on 2nd May.

I found on uploading my 22nd video that Youtube started pre-screening my uploads for copyright infringement. Bizarrely, it flagged up a section of Divine Divinity No. 6 (above) as containing a copyrighted "melody" during one section of gameplay that's just low wind noises and dripping native to the game. I've contested the copyright claim, which would see the video monetised for the copyright holders of the specified, unrelated track in some regions and I'm awaiting a response on that. If that fails, I've got a version of the video prepped where I replace foley for that section with my mouth and two jugs of water, should the need arise.

I've probably more to say on the act of let's playing at another time, but for now I just want to mention how much more I'm enjoying playing games as a result of the process. It's odd, I suppose. I'm somewhat playing differently with the expectation of being watched and playing for an audience both requires greater focus and feels more social, somehow. The Feeble Files is crap, but I'm excited about playing adventure games again. I've got some ideas for future games and formats to present them in that are tantalising me, I'm having a ball with browsing and discovering games, and I'm looking forward to further playing and editing.

All in all, I've had a creatively engaged time of late and I'm glad I can share some of it with you. Thanks for reading! I'll catch you next time.